THEATRE ON THE ROAD

After Stork Hotel’s owners sold the building, Stork Theatre found a new home on the road. Stork was first invited for a three-year residency in the grand mansion Alliance Francaise de Melbourne, the French language and cultural institute in St Kilda.

“The Stork Theatre has relocated from its longtime venue in the Stork Hotel in Elizabeth Street to the Alliance Francaise. The lines of sight in the space were not always perfect, and the seating was fairly basic, but there was something fundamentally and nakedly theatrical about the wonderful productions we saw there”.
The Age Melbourne Magazine – April 2009

In 2013 Stork Theatre returned to the inner city, staging the Australian premiere of THE PENELOPIAD, Margaret Atwood’s new play, at La Mama Courthouse. 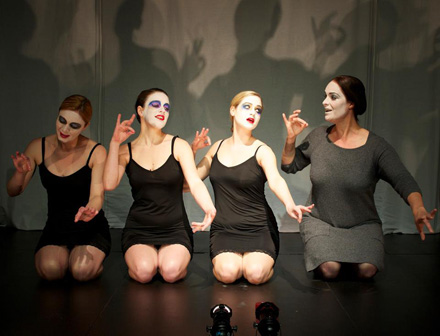