Helen Madden’s theatre crusade began with an idea to bring open-air theatre to Melbourne with a bilingual summer theatre festival.

Helen developed the Epidavros Summer Festival idea in 1982, working in collaboration with the Northcote City Council and members of the local Greek community. After searching extensively across Melbourne for a perfect location, the Yarra riverbank at Fairfield Park became the obvious choice for open air theatre. The landscape already provided a natural amphitheatre and importantly it was also a hub of the Greek community in Melbourne. 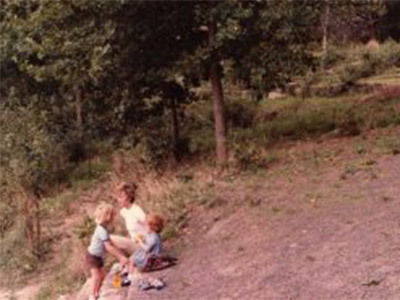 Choosing the riverbank site for an amphitheatre, 1982. Helen with Don and Cassandra at the site 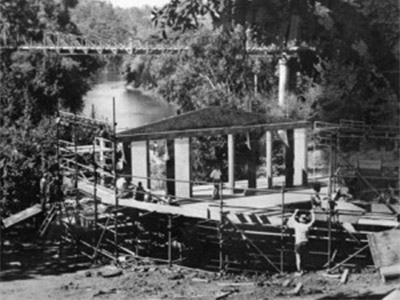 Our pop-up scaffolding theatre on the Yarra riverbank. 1983 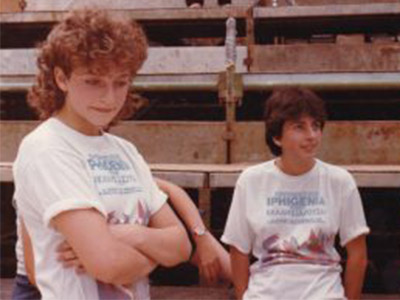 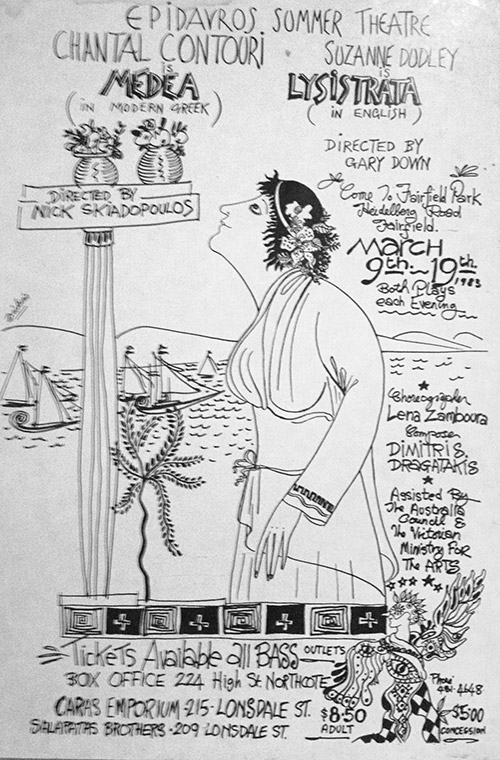 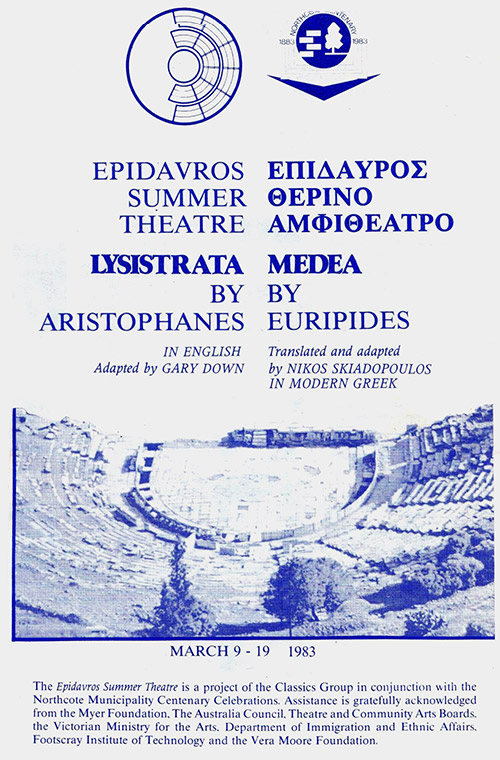 Helen experimented with the festival concept in 1983 and 1984, using a pop-up scaffolding theatre built for each Epidavros Summer Festival season.

Melbourne’s audiences and reviewers were delighted with this new theatre scene. As The Melbourne Times described of Iphigenia in Aulis:

“The Epidavros Festival is an opportunity for Melbourne audiences to see Greek classics performed outdoors and to experience the magic of open air theatre.
It’s a beautiful setting and on a summer night you get a glimpse of what it might have been like to be in Epidavros seeing the plays for the first time… The panorama forms the setting for the plays. Reality and imagination merge and there is an inherent sense of excitement.
…The river setting is a perfect backdrop for Iphigenia in Aulis. A marvellous sense of theatricality pervades the whole production.”
Melbourne Times. 1983 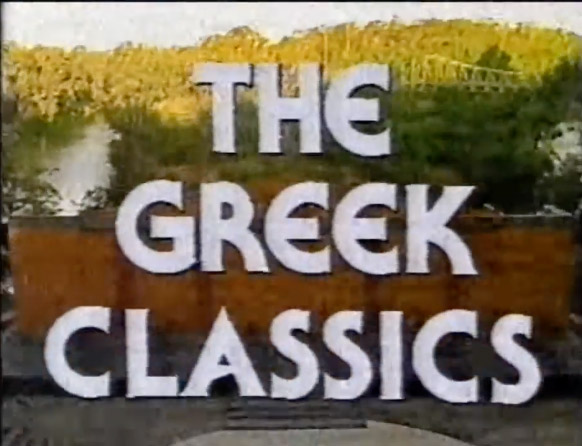 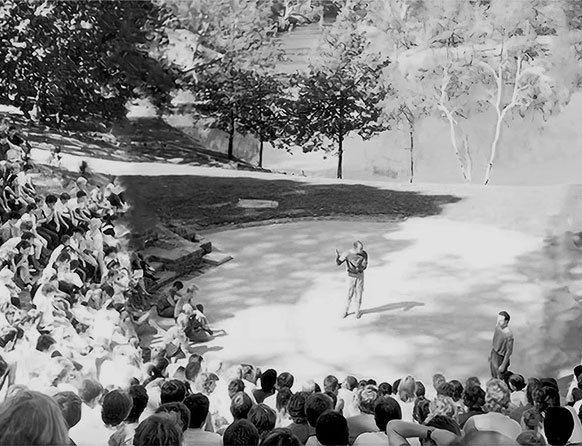 IPHIGENIA IN AULIS at the Fairfield Amphitheatre in 1984. 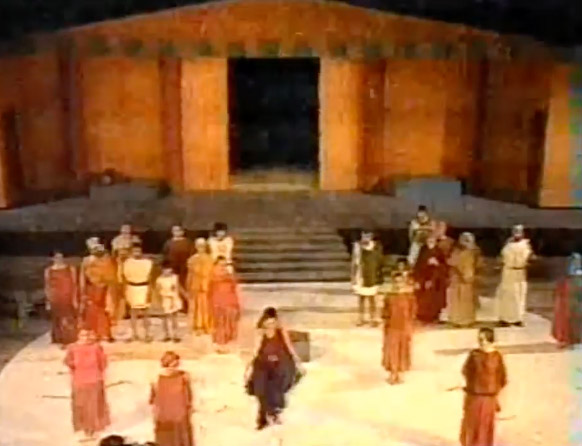 MEDEA at our pop-up scaffolding amphitheatre in 1983. Image from original footage. 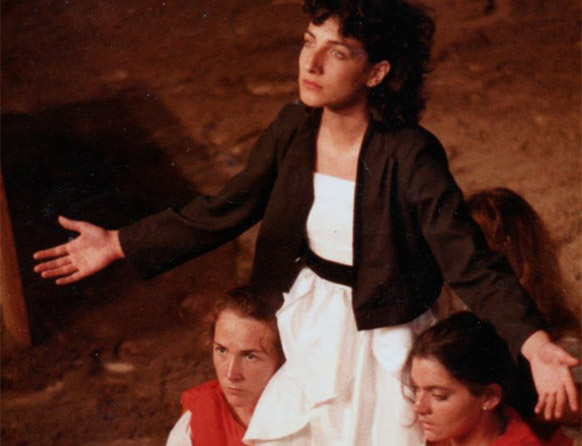 IPHIGENIA IN AULIS opened with messengers arriving by boat onto the stage in 1984. 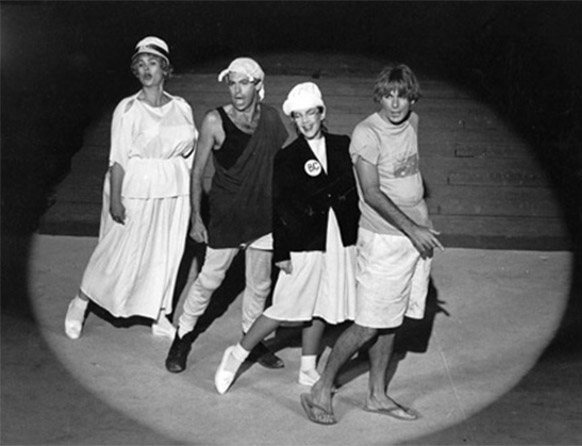 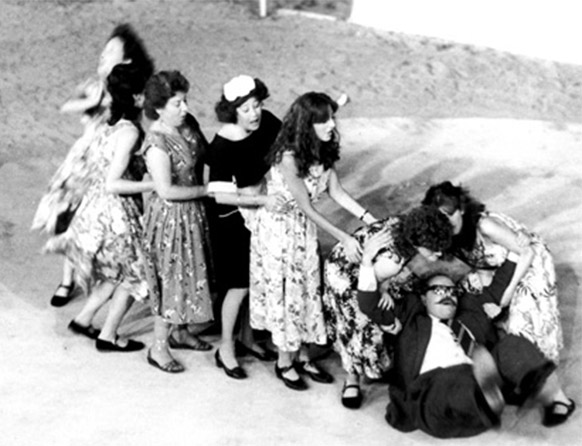 ECCLESASOUZI at the pop-up amphitheatre in 1984.

Click here for original clips from MEDEA and LYSISTRATA under CLASSICAL.

In 1985, the Festival’s success led the progressive Northcote Council to seek funding to build a permanent amphitheatre at the site.

Helen worked with the Council, Fairfield Residents’ Association and Greek and Commonwealth Governments to plan the construction of a permanent amphitheatre and its first five-year season. Helen also worked with Edmond & Corrigan Architects who designed the stunning 500-seat bush amphitheatre. Modelled on Epidavros Theatre, a 12,000 seat amphitheatre in southern Greece, the aim was to meet the most demanding theatrical needs while preserving the natural environment.

The Commonwealth Community Employment Program (CEP) financed the project. Unemployed workers were trained in stone-cutting skills to build the new permanent Fairfield Amphitheatre. Bluestone originally from Northcote gutters and laneways, was rescued from an old storage depot and used to build the theatre. The first Fairfield Amphitheatre board included members from the arts, community and corporate sectors. The Hon. Brian Howe, former Deputy Prime Minister and Member for Batman, was the inaugural Chairman.

Today, the stunning Fairfield Amphitheatre remains our ONLY professional outdoor theatre venue and Ancient Greek amphitheatre. It has the remarkable acoustic phenomenon in which a person whispering on stage can be heard through to the very back row, as per the most famous theatres of Ancient Greece. This phenomenon provides extraordinary acoustics and exists in no other venue in Victoria (or Australia). 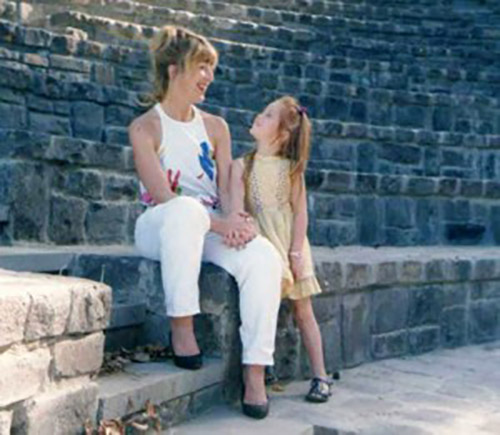 Helen and Cass in the new permanent bluestone Amphitheatre, 1986 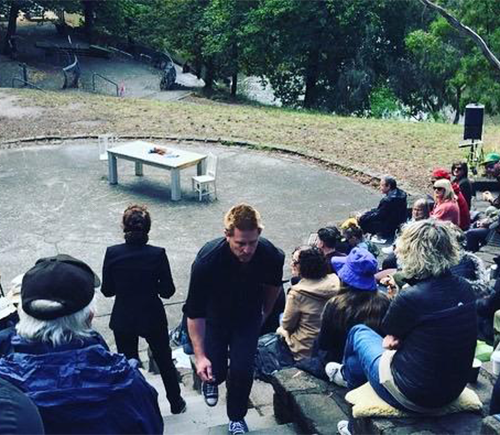 Sigrid Thornton descends from the ramparts with Alex Madden, March 2021. 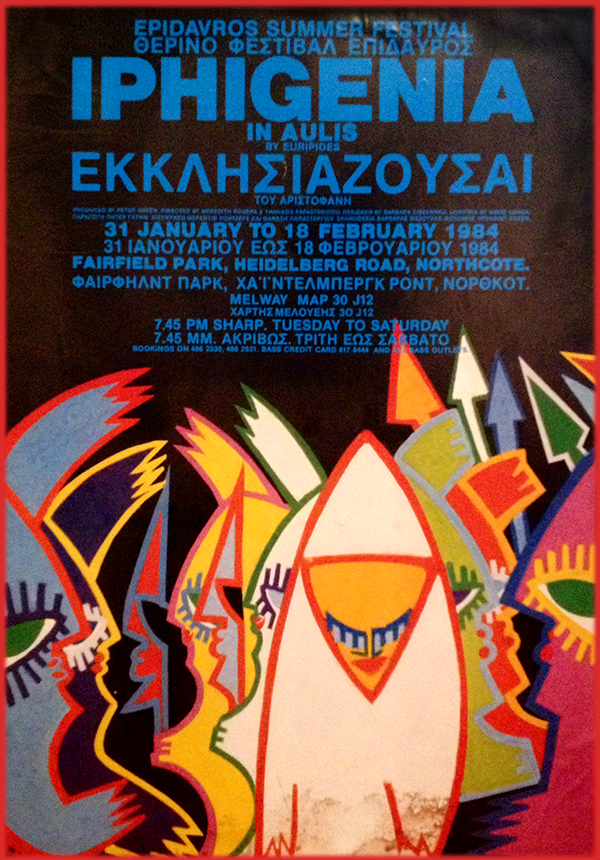 Original poster for IPHIGENIA IN AULIS, 1984. 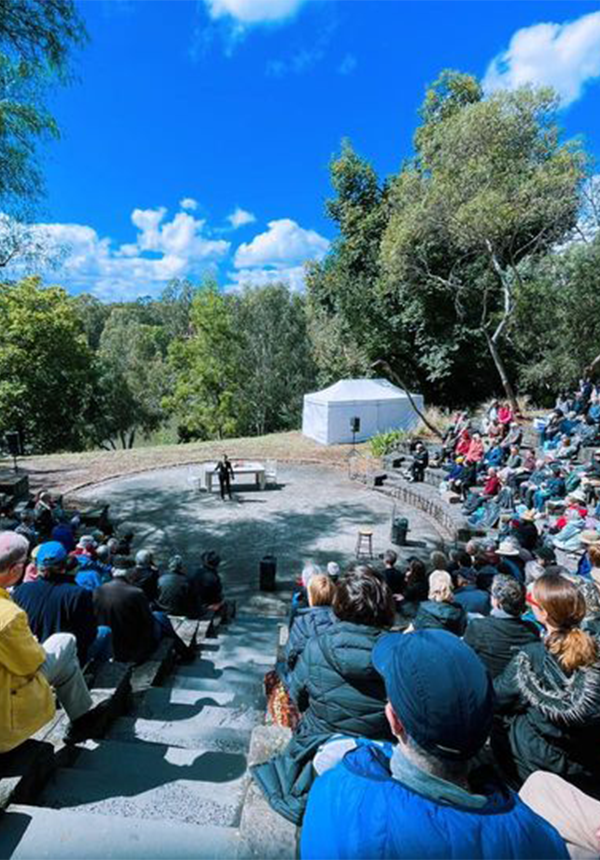 Our 8-hour performance reading of HOMER’S ILIAD was a sell-out. March 2021.

In 1986, Playbox Theatre opened the first season of the permanent Fairfield Amphitheatre with THIS ANTIGONE by Sophocles, directed by the renowned James McCaughey.

Helen brought the Attis Theatre production of THE BACCHAE by Euripides, from Greece in 1987. The show outraged audiences for its brevity, violence and eroticism.

From 1987 the Epidavros Festival expanded into the Wang Summer Festival when it attracted significant corporate sponsorship. This support enabled the program to grow and feature opera, cinema under the stars, comedy, poetry, music and other theatrical events, until 1992. 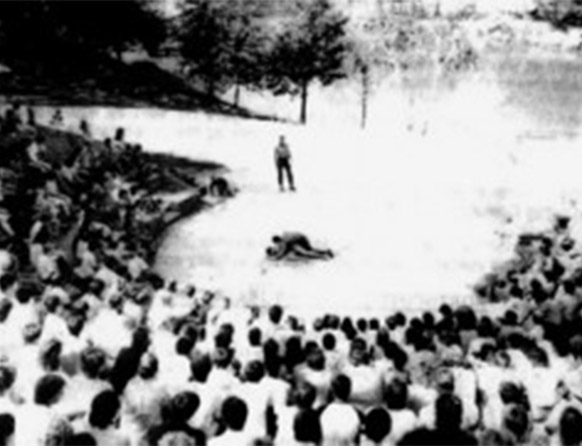 THIS ANTIGONE at the newly built permanent Fairfield Amphitheatre. 1986 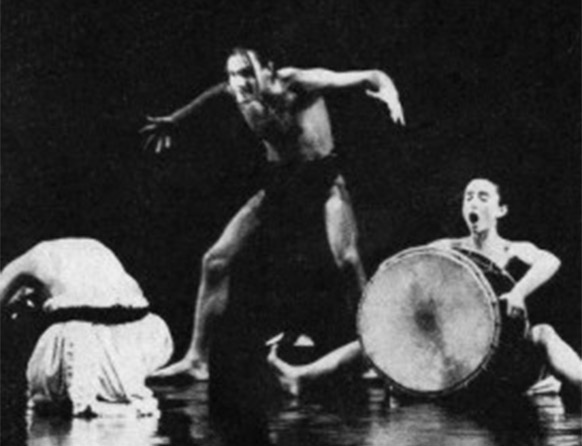 THE BACCHAE at the Amphitheatre shocked Melbourne audiences. 1987 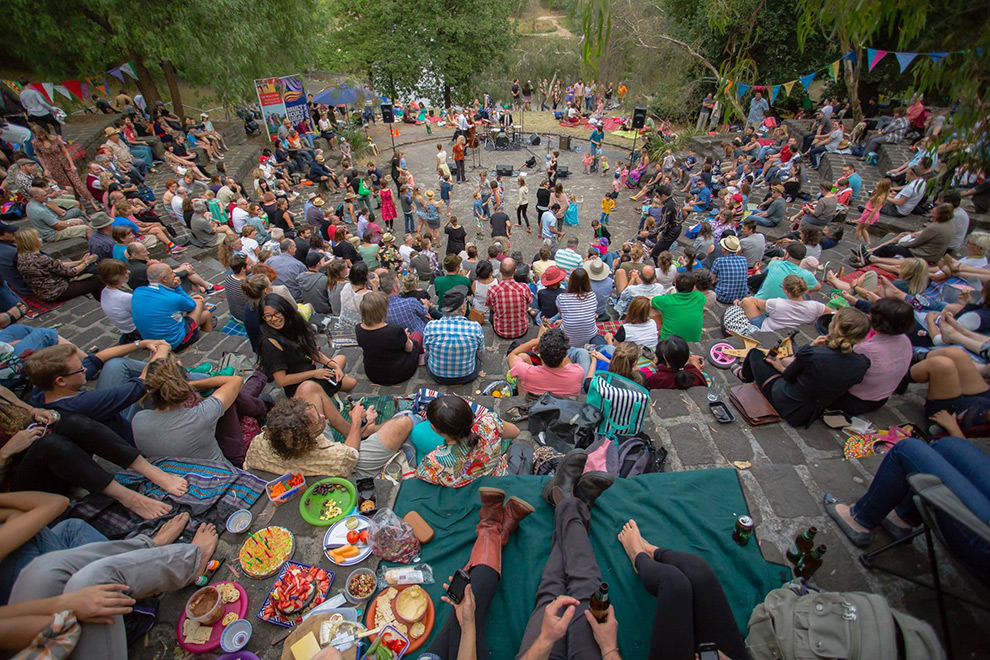 THEATRE AT THE PUB and THEATRE ON THE ROAD.